„Don’t Push”— Pressure Centers Above and Below

How many times have we singers heard that admonition; “Don’t Push”? Either we’ve said it ourselves (to ourselves or our students) or we’ve heard it a million times from our own teachers. It sure sounds like good advice, but if you ask for a detailed explanation and then really listen, it becomes clear that everyone understands something VERY different when they hear that.

When the diaphragm lowers on inhalation, it creates negative air pressure in the lungs so air can flow in. At the same time, it creates positive air pressure in the abdomen. In singing we use micro-regulatory movements in the lung area and the abdominal area to influence our tone. The sub-glottal air pressure needed to bring the M. Vocalis into phonation is the critical part of what is meant by ‘push’. How to optimize this sub-glottal air pressure in every phase of lung volume is part of the art of singing. “Don’t push” is a negative double bind, not unlike ‘don’t think about rose-colored elephants’. Only with the mental elephants it is actually possible to, at some point, not think about them. In the case of singers while singing, it is impossible to eliminate the ‘push’ of sub-glottal air pressure. To make things even more complicated, some teachers even slap their stomachs when they say “don’t push”. Students then, in an effort to make the teacher happy or at least show that they’re trying, ‘push’ their abdominal muscles out to show that they are not ‘pushing’!

As ‘push’ refers to physical areas of felt pressure and pressure is necessary in order to sing, it becomes clear how confusing this negative double bind can be for student singers. Fortunately there is an alternative to these kinds of “Keep-It-Simple”, dumbed-down admonitions that make teachers feel wise and all-knowing and confuse the BelCanto out of students. What a student needs is a referencing experience for optimal pressure center balance above AND below the diaphragm. As we’ve seen, ‘telling’ the students what to do (especially if they have no sensory anchors for it) confuses. We could sing at them and hope that the parrot effect and the auditory mirror neurons are up the task of transmitting to the student precisely what it is we want. More effective in my experience is to offer the student a comparison between how they’ve been doing it up til now and what it feels/sounds like when the felt pressures are more in balance. 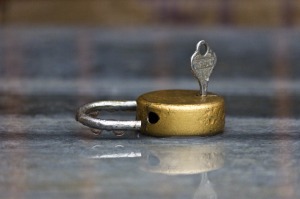 I’ll use a simple exercise as an example. Vocalize a student into a tonal area in which they’ve yet to find their optimal sub-glottal air pressure balance. Then go back and forth a few times from a tonal area in which the balance feels optimal to where it does not, asking in detail what it is that feels unbalanced and/or excessive. If the student has trouble describing it, offer multiple choice;

We do this to key the important singing-sensations so that a viable comparison is possible in the next step. In this next step, you ask the student to sing the phrase twice in the tone area where excessive tension is felt (usually around one ‘passagio’ or another). The first time, the student sings it as he’s been doing up til now. The second time the student raises his hand directly over his head (right or left, depending on which shoulder you observe to be slightly lower). This particular exercise (there are, of course, thousands of them) does something very specific. It allows more lateral expansion on the side of the raised hand, thereby lowering the diaphragm DURING EXHALATION directly affecting the centers and tension chains both above and below the diaphragm. It also releases and stretches the spinal erectors, the trapezius, the teres, the external intercostals and some others to increase the inhalatory impulse (i.e. Inhalare la Voce), thereby functionally reducing subglottal tension. After the singer does this first without, then with the arm exercise, we ask about what we’ve ‘keyed’ or ‘primed’ in the phase before;

and/or whatever else the singer has referenced. Repeat this comparison until you have the sense that the difference between the first repetition and second are becoming less, evidence that the student is consciously, preconsciously or unconsciously integrating the effects of the exercise.

It is at this point that more simple-minded individuals say (often disguised as a question) something like; “but you can’t always sing with one arm raised!” That’s what I mean when I speak of a ‘referencing experience’. We give the student a sense of what a more efficient balance feels like, not by singing at him, not by ‘telling’ him, but by example from his own voice/body! To integrate this, you now change the order. Ask the student to sing with the arm raised first and without the arm-raise second, with the inner intention to keep the sensations as similar as possible. After repeating this a few times, go through the questions above. Like a good lawyer, we ask questions that, generally speaking, we already know the answers to. The body is listening VERY CAREFULLY and when the student formulates positive, balanced sensations HIMSELF, it not only creates new neural networks, it allows the student a neuro-linguistic anchor for ever higher efficiency, ease and joy in singing.

As I mention above, there are myriads of such comparative exercises and myriads more yet to be invented. For whatever is functionally, anatomically, aesthetically, acoustically or sensorily out of balance, there is an exercise that brings it more into balance through comparison and felt sense. Using the above procedure try, for example;

…to mention just a few I’ve used with profound effect.

Of course there will always be a place for singing demonstrations to make our points. There will also always be a place for complexity-reducing sentences like “Don’t Push”, “Let Go”, “Place the voice forward”, “Lift the soft palate” and countless more. Understanding how a student creates a referencing experience for himself and how to enhance that experience allows for more than just these two. In the last analysis, we wish for the student to become an independent and self-correcting artist. In my experience, promoting the student through questions and conscious comparison to formulate his own positive sensations increases both his understanding and his artistry.

I'm a passionate, curious learning junkie--- an X-Opera Singer turned Voice Teacher, Voice Teachers Teacher, NLP Lehrtrainer, Off-Path Coach, Cranio-Sacral worker and a few other even less mainstream things. Everything I've learned or taught revolves around THE VOICE. The Voice as a tool of artistic expression. The Voice as a tool of emotional transparency. The voice as a tool of flexible communication. More information can be found at my Institute Site: www.musa-vocalis.de The Wiesbaden Academy of the Vocal Muse Gesangsunterricht Wiesbaden, Coaching, Voice Pedagogy
View all posts by evanb54 →
This entry was posted in Breath, Breathing, Mental Training, Music, Opera, Pedagogy, Performance, Singing, Teaching, Voice and tagged Balance, Diaphragm, Pressure, Push, Singing, Student, Teachers. Bookmark the permalink.