ODE TO THE GUARDIAN ANGEL or “Serendipity Streaks”!

I asked myself recently how I represent “Luck” to myself. Is there even such a thing as luck? Depends on your standpoint, of course. Positive things that happen with no explanation and no effort on your part are defined and explained by different people differently. But how we represent that to ourselves, in my opinion, is crucial to living ‘la dolce VITA”. As I don’t need to tell you, it goes hand in hand with “Thankfulness” as a value….as a principle….as an essential ‘need’, in the Maslowian sense.
Especially interesting is how these little droplets of serendipity seem to come and go in waves. People seem to be fond of telling you about their present streak of bad luck. You seem to hear much less about streaks of serendipity. Probably cause people don’t want to jinx it. Or they don’t want to evoke envy, or sound big-headed. But maybe it’s also because they’re simply not aware of it! Especially the little things. I’ll give you an example. I’ll give you two!
I was driving in Frankfurt through one of those S L O W constructions sites, where two lanes merge into one, then another second lane merges also into one. In front of me was a very large transport vehicle transporting a very large construction machine. So large that I couldn’t see that there was a traffic light and it was red. The moment I noticed, it was too late, I had already rolled through it. As fate would have it, right next to me and a bit behind was a police car. Looking at me very sternly, the cop in the passenger seat gestured for me to roll down the window. He then told me I’d run a red light. “What!” “Oh my God, I didn’t see it, because of that truck”, an excuse which, in the entire history of the galaxy has never worked. Both cops took a deep breath and said; “be careful, you could get your license revoked for running red lights!”. They then rolled up their windows and drove on.
HUH!
Now that’s never happened before. I looked carefully over my shoulder to see if my guardian angel was hovering.
Just last week, for the second example, I was doing an evening workshop and a participant with a very familiar face came over and told me what a nice surprise it was for her, that I was doing these seminars. She had been a coaching client of mine years before. Oh, and also, she was looking around in an old drawer right after registering for the course and found an envelope. It seems, she completely forgot to pay for the last coaching (I had too) and when she realized it, all those years ago, she put the money in an envelope with my name on it. Because the coaching was successful and she didn’t need another one, she’d forgotten the envelope. And, of course, because it was Christmas, she gave me a present in addition. Again, I sensed some beneficent force hovering.
Now of course you could say the cops didn’t give me a ticket, cause they rolled through the red light themselves and that was money I earned, so it wasn’t really “serendipity”. But that would be missing the point.
And the point is…….drum roll please……”serendipity” is a consciousness filter!
In other words, we filter our environment, internal and external, in very specific ways. A filter for streaks of serendipity is a consciousness for things to be thankful for. 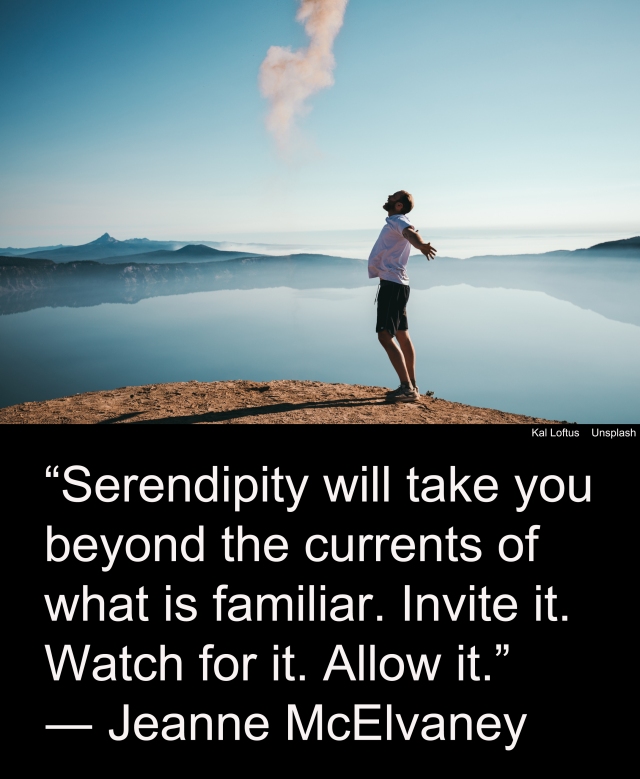 To make the idea clearer, just imagine for a moment that your filter is something close to the exact opposite. Let’s call it the ‘crap filter’, in which you scan your environment, inner and outer, for anything and everything that’s shitty. As I don’t need to tell you, if you’re filtering for crap, YOU WILL FIND IT! I know about this one so well, cause I’ve done it so often. I’d venture to say we all have. It’s interesting to notice amongst older people, how these filters trickle over and into posture, gesture and especially facial expression. Imagine what decades of using the crap filter will do to your facial muscles. Part of the fun of people-watching is intuiting such connections between inner attitude, consciousness filters and facial expression.
Consequently, if it is at all possible to control which filter you currently have loaded and to change rapidly when you realize you ain’t happy with the current one, then the “serendipity” filter comes highly recommended.
In pre-modern times many referred to the ‘guardian angel’ when filtering for serendipity. I’ve always been fascinated by the different explanations for luck, serendipity, free-flowing good fortune….anything positive that comes unbidden and un-earned, at least directly. God, a guardian Angel, Fortuna, Karma, Jupiter, Akshaya, Pure Chance, Personal Power, the Causal Body and so many more over times and through cultures are attempts to explain and even control the flow of serendipity. Whichever standpoint presently suits your perspective, one way or the other, you are representing it somehow to yourself. When Jeanne M. above says “Invite it. Watch for it. Allow it”, she’s not inviting you into a sect or an indoctrination of belief. What she’s saying, I believe, is my point here:
Leaving conscious space internally and externally for the unexpected positive does something extraordinary with us. Being thankful, in advance, for something that hasn’t happened yet, that you haven’t intended and that you cannot yet imagine encodes our nervous systems, our breathing, our inner representations, our muscle tone and our feed-forward consciousness filters to something grand deep within us. In “Anusara” Yoga, my most recent passion, they call this “Open To Grace”. It’s a thing. Yet even if you’re interested in neither Yoga nor Grace, it’s worth trying this out for a day or two. Be thankful, in advance, for something unexpected which will move you in some positive way for a few days and see what it does with you. It’s a profound experience. I'm a passionate, curious learning junkie--- an X-Opera Singer turned Voice Teacher, Voice Teachers Teacher, NLP Lehrtrainer, Off-Path Coach, Cranio-Sacral worker and a few other even less mainstream things. Everything I've learned or taught revolves around THE VOICE. The Voice as a tool of artistic expression. The Voice as a tool of emotional transparency. The voice as a tool of flexible communication. More information can be found at my Institute Site: www.musa-vocalis.de The Wiesbaden Academy of the Vocal Muse Gesangsunterricht Wiesbaden, Coaching, Voice Pedagogy
View all posts by evanb54 →
This entry was posted in Uncategorized. Bookmark the permalink.

1 Response to ODE TO THE GUARDIAN ANGEL or “Serendipity Streaks”!